A short boardwalk trail begins at the far end of the parking lot. After descending a set of stairs, the bottom pool and lower falls will come into view. Cross the bridge over the river and climb up the left side of the gorge along a metal fence if you wish to continue exploring upstream. Within a 0.1 mile, you will observe four distinct sets of falls, and eventually reach the top of the gorge and other popular swimming areas.
The Big Rock, otherwise known as Daggett Rock, was and still is a tourist attraction. It is a granite boulder measuring 50 to 60 feet in diameter, with its top 30 feet above the level of a nearby hillside. Each year, geology students from the University of Maine at Farmington trek up to inspect this unusual glacial deposit.

There are big rocks, and there are bigger rocks. And then there’s Daggett Rock, in the western Maine town of Phillips is the source of local legend and a certain notoriety.

Daggett Rock, sometimes referred to as Daggett's Rock, is thought to be the largest glacially transported erratic in the State of Maine. Daggett Rock is approximately 80 ft long, 30 ft wide, and 25 ft high and may weigh as much as 8000 tons. It has broken into three pieces since coming to rest. The power of the glacier can be appreciated by determining the source of the boulder. The rock is made of granite with some feldspar crystals more than 1 inch long. The granite may be derived from the Redington pluton in the Saddleback Mountain area many miles to the northwest -- a long way to transport an 8000 ton rock! 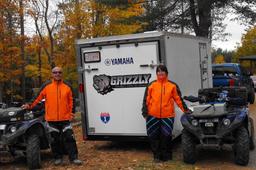 Activities  and Places of Interest 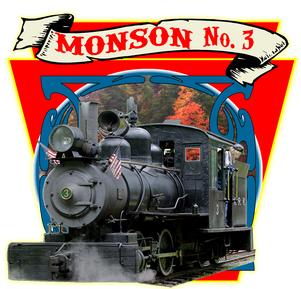 An erratic is a rock that doesn’t belong with the rocks around it. Instead it was dropped after being carried for miles and miles by a glacier. According to the Maine Geological Survey office, erratics can range from pebbles to boulders, and Daggett Rock is the biggest in Maine.  A testament to the power of the glaciers that once covered Maine.

The rock was popular back when visitors could drive to it, and postcards featuring the formation date back to the late 1800s. These days travelers park on the road and hike in along a short trail.  Today Daggett Rock is accessible via a public path approximately 1/3 mile (0.5 km) long that extends west from a trailhead and parking area on Wheeler Hill Road in Phillips.

According to local legend, the boulder got its name some two centuries ago, when a drunken woodsman named Daggett climbed the rock during a fierce thunderstorm, took the Lord’s name in vain, and declared that he couldn’t be touched. A gigantic lightning bolt answered his curses, struck him dead, and split the rock into the three pieces visitors see today. 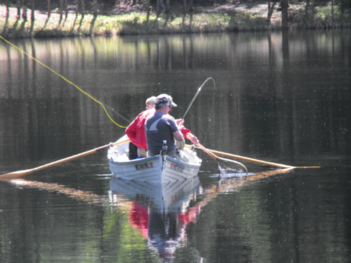 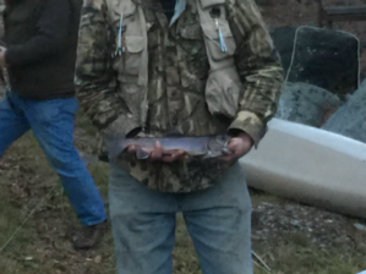 There's a very active ATV club in Phillips with over 100 members. They keep trails that connect with miles and miles of Maine ATV trails groomed and maintain good relations with the landowners. The club emphasizes family fun and participates in a wide variety of other activities for the town. They put on an ATV pull during Old Home Days and are involved in the fixing up of the Franklin Park, the baseball field at the old fairgrounds.

There are nice walks in Phillips, on the railroad property along the river, up to Daggett Rock off the Wheeler Hill Road.

If you drive a little ways north on Route 4, you can get to the Appalachian Trail. Be sure to stop by Small Falls on the way. If you head toward Weld, there are three routes of varying difficulty up Tumbledown, all suitable for day hiking. For a climb that's good for kids, not long but a steady climb, go up Mount Blue off the Center Hill Road in Weld (there's also a nature trail and picnic area). There are some trails at the Webb Lake beach area. If you go to Kingfield, take the West Kingfield Road where you can take the Fire Warden Trail up Mount Abram. Dont forget the Fly Rod Crosby Trail which is accessible from our facility.

As the Sandy River cuts through Phillips check out these swimming holes. The Park by the Bridge, which is publicly owned, has a nice deep swimming hole and some big boulders to jump off. The other spots are on private land so we take care not to leave trash or be too rowdy. The Woolen Mill - the spot in the river where the woolen mill used to be - has great vast rocks to jump from and swim around. It also has a small safe sandy spot for kids. It's fun to swim there with goggles and a mask so you don't bump your head on a boulder.  And the Depot offers a nice deep spot to take a dip, it's just down the bank right behind an old passenger car from the Narrow Gauge Railroad Museum.

Preserving, restoring and collecting the artifacts of the SRRL RR. Presenting the history of the railroad by providing a living history experience. Offering passenger rides to the public on recreated two foot gauge track. www.srrl-rr.org

Some of the pleasures of ATV'ing around Phillips are the spectacular views, plentiful wildlife, pristine forest. Some risks include facing down hundreds of pounds of angry moose when you unwittingly intrude on his territory.

Just out side of the town of Phillips, the “Smalls Falls Rest Area” attracts more than just travelers looking for a driving break. Smalls Falls, with its scenic waterfall, colorful gorge, and fine swimming holes, welcomes all, often including visitors from all over New England. It does not take much water flow to make this waterfall impressive enough to please all its visitors. Just a tiny stream can create a false sense of whitewater power. This is attributable to the fact that the river upstream is considerably wider than the width of water that flows over the four sets of falls at Smalls Falls. The bottom of Small Falls consists of a 3-foot cascade falling into a 20-foot wide circular pool. The next waterfall up is a 14-foot fanning horsetail with a deep oblong-shaped pool people tend to jump into from above, a stunt that is highly dangerous. Even further up the trail, you will find a 25-foot segmented waterfall, with a plunge on the left and segmented horsetail on the right. The top waterfall is a 12-foot horsetail and slide. Beyond the final falls of Small Falls lies tiny plunges and cascades with equally clear and beautiful water. The only potential detraction from these great views are the chain link fences keeping you safe from falling over the rock walls, an acceptable price to pay for a dangerous alternative. All four sets of falls are found within a one of most colorful and beautiful gorges in the region. Its colors consist of beiges, oranges, greens, blacks, browns, gold, and ivory. There are plenty of places to sit along the gorge walls and bask in the beauty of the wide open area. Other features that make this waterfall so popular are the pools to swim in and the numerous places to picnic. At the base of each plunge, cascade, and horsetail is a pool to either wade or swim in. At the base of the lowest fall is a rocky beach, leading to the pool. There are also bathrooms, picnic tables, and fire pits—altogether, a place as accommodating as any picnic spot you can find. 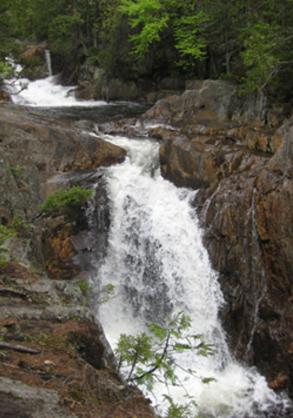 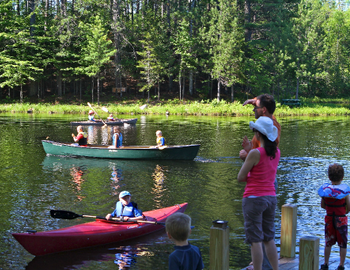 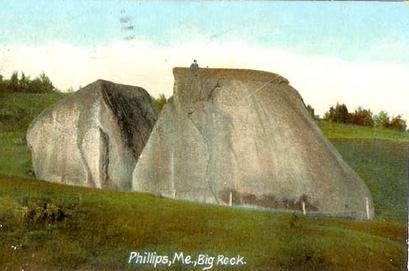